Another Red Head on the Cover

A Home for My Heart

A sweet story of hope and love set against the poignant backdrop of a 1910 orphanageSadie Sillsby works as the assistant to the matron at the Raystown Home for Orphan and Friendless Children, pouring all her energy into caring for the boys and girls who live there and dreaming of the day she'll marry her beau, Blaine, and have children of her own. But when the matron surprises everyone by announcing her own engagement, Sadie is suddenly next in line for the esteemed job of running the orphanage.There's one glitch. The matron cannot be married. She must focus her attention on the financial, legal, and logistical matters of the Home. Sadie's heart is torn. Should she give up her plans for a life with Blaine in order to continue serving these children who have no one else? Does she, a young woman who was once an orphan herself, have what it takes to succeed in such a challenging career? And when the future of the Home begins to look bleak, can Sadie turn things around before the place is forced to close forever?

I have to be honest. Out of all the books that I have read this one is just not cutting it. It is a good book. The story is technically well written, it was just really angst-y. I know that sounds whiny, but I couldn't help but think that the characters were over extending themselves. They went beyond what we could see is their stopping point, they were constantly overreaching themselves and we never got away from that.

On the flip side, you could say that this overreaching is only human and that it is a relatable quality, that we as humans are never satisfied. I found this annoying. When I read books I don't read to read the same faults I see in myself (although if you like this, you might enjoy the book). I read to see the other positive qualities and abilities other characters possess, I read for the story.

The novel was well written, with a mildly interesting plot line that was done correctly, and actually wasn't just fluff. If you really enjoy reading soul searching, not fluffy books than this might appeal to you. Overall, I just wasn't satisfied with what happened.

I received a complementary copy of this book in exchange for my honest review.
Posted by Dom at 2:56 PM No comments:

When Chantel Panetta's younger sister claims to be in love with Orlando Calarco, Chantel knows there is no hope. The Panettas and Calarcos have been sworn enemies for decades, and young love cannot heal the deep wounds between the two iron-mining families. Yet, unable to resist Isabella's pleas, Chantel agrees to help her sister spend time with Orlando...only to have a run-in with Dante, Orlando's brother. The older, more handsome one. Chantel can't deny the attraction that flares when she's with Dante. But when a tragedy occurs at the mine, is there any hope that the hatred that has simmered between these two families might be resolved? Or will Chantel's hope for love be buried amidst decades of misunderstanding?

The Miner's Lady is the third book in the Land of Shining Water series, again. It might not surprise you at this time that I haven't read the other two. I didn't have a hard time reading and understanding so they are pretty standalone.

The main characters are Italian and in a romeo and juliet-esque feud. I thought the idea was cute, every one likes star crossed lovers once in a while. When I say Italian though, I mean Italian. Tracie Peterson went above and beyond. My mouth was quite literally watering through most of the book. Real Italian recipes and boy did they sound good. Italian wedding traditions, and realistic broken English all helped create the perfect tone. However, the characters spoke in Italian. I don't know Italian. I had some issues in that regard. It wasn't to bad, but still pretty annoying. I wanted to know what they were saying, and I had to spend extra time trying to find clues or look it up.

Other than that it was pretty good. I found that while we are introduced to one couple, we see no real development there, and there isn't a lot of relationship development with the other forming couple either. But, there was tremendous individual character development, that was done realistically and well. Overall I was pleased with the book.

I received a free copy of this book in exchange for my honest review.
Posted by Dom at 9:14 AM No comments:

Back to the Past: Reading Novel One

The Dragon King Seeks His Princess 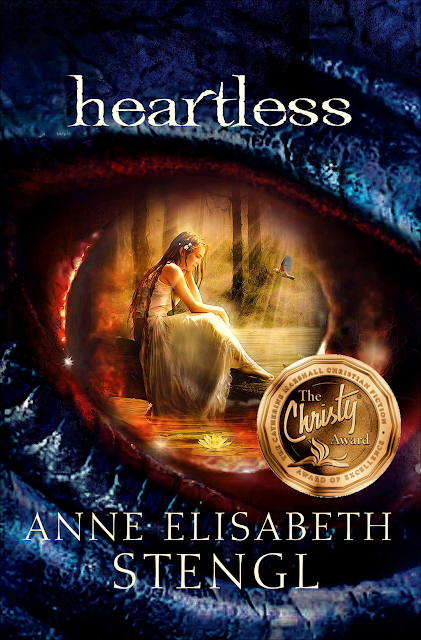 Princess Una of Parumvir has come of age and will soon marry. She dreams of a charming prince, but when her first suitor arrives, he's not what she'd hoped. Prince Aethelbald of mysterious Farthestshore has travelled a great distance to prove his love--and also to bring hushed warnings of danger. A dragon is rumored to be on the hunt and blazing a path of terror.

Una, smitten instead with a more dashing prince, refuses Aethelbald's offer--and ignores his cautions with dire consequences. Soon the Dragon King himself is in Parumvir and Una, in giving her heart away unwisely, finds herself in his sights. Only those courageous enough to risk everything have a hope of fighting off this advancing evil.


Heartless was great! I have to be absolutely honest, I read Dragonwitch (the fifth book) first. When I told my friends, they about tore me to pieces. Reading in order, so last century. Anyway, I loved Dragonwitch so much, that I had to go back and read the rest of the Goldstone Woods series.

I am happy to say I wasn't disappointed. The format was still a little odd, with unknown slightly menacing characters having their time in italics once every chapter or so. Creepy. I still haven't figured out who they are or what roles the play, and I probably won't stop reading until I get there.

When I heard the story was Christian Fiction, I didn't get it. It was by a well respected Christian publishing house, but I didn't understand how it ties in. So I went a looking on the internet, and found that it was supposed to be allegory. A lot of the reviews were angry, because they thought it was forced, and that it didn't flow right. Meanwhile, here I'm sitting and it isn't obvious to me. I finally get it while talking to my dad at the grocery store. I explain what is going on and he points out that sometimes allegory is split into two different people. This gets me thinking, maybe it is more than one person. When I finally got it a half an hour later, I realize that the people are merely mist in comparison to who they are supposed to allude to. I liked that. I could finally see the symbolism. It isn't overly obvious, but personally I don't think that that effects the story in any way. It just added another layer to think about. This book has plenty of layers. I have never had to do so much thinking since I read Sense and Sensibility and finally had to look it up.

Great read, definitely recommend it. If you like fantasy, romance, or interesting twisting plot lines than this is probably a good choice for you. Heartless  has a blog: http://heartlessnovel.blogspot.com/. If you like this book it has a lot of interesting information about the book. In fact, I found the following on it.

These are some covers that could have been: 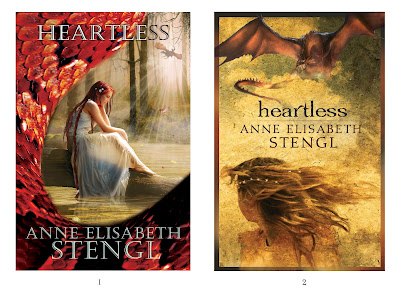 Aren't they super cool?
Posted by Dom at 3:05 PM No comments: